I would like to talk about the living situation, about Guantanamo Hesepe. As we are in the year 2007 all the hole world is against the American Guantenamo and they forget that there is another existing Guantanamo in Hesepe Deutschland as I use to live there and due to my experience for about one year with my family. As a five persons we use to live in one room. 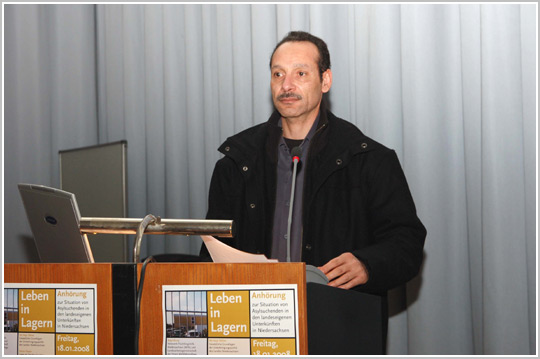 We were astonished and surprised when we first arrived there as the first empression we heard about the lager as its a gale not a place for human being to live as the lager is seiged with a three layers of fence and controlled by a security and monitored by a an electronic cameras all arround the lager, so my wife and my kids start to cry as they were shoked from the horroble view of the first empression as they have to live there and that was before even they enter into the lager, so I start to realize that this is the presecution itself that we were sufferng off.

We as refugees come here to Deutschland because we have fear of presecution due to our sex believes, religion believes or political believes, but we have found ourselfs lost and living in the mid of no where in Guantenamo Hesepe and the servility, contempility and the presecution of the Auslanderamt untill we all become depressed, frustrated and stressed due to the treatement of the lager administration as they are purposely slavish and always insulte us and that the reason why most of the people are psychical sick due to the distructive behavior of the administration.